An ad on BART

On the way back from Berkeley yesterday, I saw this ad on a BART train. 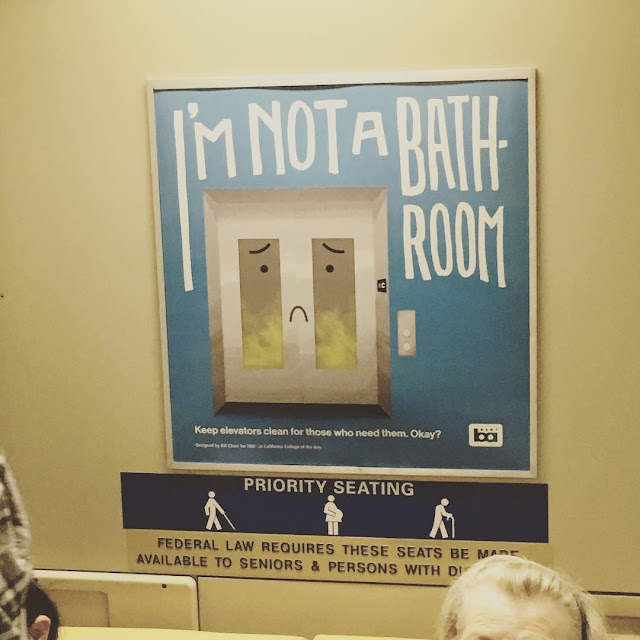 Many questions came to mind as I stared at it for the duration of the ride:

Your tone comes from your head

About a week ago, I had a minor breakthrough on violin: I shifted the pad of my right pinky to rest on top of the bow, rather than falling to the side, which forced me to hold the bow with the hair flatter on the strings. This felt different and required getting used to, but my sound was better. I also remembered that my teachers long ago had told me to hold the bow this way.

Three days ago, I had another minor breakthrough that built on top of this. I was trying to sustain the sound in a particular rising, angsty phrase of the Brahms sonata (no. 1), and I felt I was working pretty hard and still not getting the sustained sound I wanted. I thought about something I'd read recently, that you really want to be using gravity to draw the bow. I tried to achieve that feeling. It was easier to do at the upper half of the bow—I needed to keep my elbow higher. But I was losing that feeling as I got to the bottom half. I looked in the mirror and saw I had to curve my wrist more as I reached the bottom of the bow to maintain that feeling. Again, these were things my teachers had told me before, that I had not been able to put into practice until now.

I've been playing violin for twenty years now, without a teacher for the last five. I spent the first seven years with a teacher who only looking back I can see imparted poor fundamentals that led to years of shoulder pain and un-learning and re-learning that continues today. (Still, seven years of flawed learning was better than none, given that the damage was recoverable and that in the meantime I was able to participate in youth orchestras.) That after this long time, something clicks, is a surprise, and I mused on why? What should I take away? Here are my reflections.


Working to fix past mistakes takes time. Patience is key. Other people may be faster, and that's okay.

The most frustrating part of youth orchestra was that as I learned more about how to phrase music and how it should sound, I still was not able to play it, and I could see my peers progressing much faster.

After college, my life became focused on work, with music at the periphery. Within music circles, though, I had the same frustrations, and as work got busier, I started playing more often alone, practicing at home. Both were important: knowing I could be better, and plodding along for years.

The famous cellist Pablo Casals was asked, through his advanced years, his 80s-90s, why he still practiced so hard every day. He said, "Because I think I am making progress."

I think taking the time to play alone helped a lot. I became more okay with my pace of progress and happier with the task at hand. I was talking to my friend Kevin yesterday and realized this irony, which is I feel more anxiety about how much I am improving at my job versus at violin, even though I spend more time doing my job and arguably perform better among all software engineers as a whole than among all violinists as a whole.


To discover the change, I had to work from the goal, not from the mechanics. Yet mechanics are the foundation.

I ended up discovering a way to play that had the same mechanical description as things I've been told long ago, but what I was doing felt different than it had ever felt.

Part of my ability to make a change came from the years of practicing at a suboptimal position—even the experience of bowing in a suboptimal way taught me better how to hold the bow and "balance" it in my hand, a physical skill that is needed to hold it the more optimal way.


Doing it the right way is easier and less work.

If I am struggling, I should seek to struggle less. Challenge one is just to recognize the struggle, because it's easy to accept my current method as long as it's been reasonably successful. Challenge two is to know what is necessary struggle versus wasted energy. The way to recognize that a better way is better is to experience and compare it to a less successful alternative for a meaningful amount of time.

Ironically, if I had started out holding my bow the better way and forgotten how I had learned that, I would have less appreciation for why to do it that way.

It's easy to think that doing it the right way is harder, but it's actually just getting there that is hard. You have to work hard to understand and get the skills to make it less hard.


Progress is driven by innate love and focused by external pressure.

Overall, this slow process of learning violin hasn't felt like work. I've found that if I practice once a day, I am happy. It is like meditation. If I don't practice for a while, I get unhappy. There's something about being totally focused, deep in work problem-solving mentally and physically. It feels like a workout afterwards.

Yet I have been practicing by myself the past few years without this dramatic of an improvement. Why did this happen now? I'm reminded of a line I read recently, applied to startups, but applicable to my violin playing right now—to some degree, I finally feel my ass is on the line. My friend Kevin and I auditioned and got accepted to play the whole Brahms Violin Sonata No. 1 in early October, which is a bit over 30 minutes of music straight. I've played in longer concerts in orchestra or chamber music groups, but never that long as a violin solo, where you have fewer bars of rest, in a setting where all attention is on you, where people will hear the bumps but also the fruits of thoughtful preparation and practiced stamina (in contrast to Revolution Cafe, where I have performed the full Brahms sonatas no. 2 and 3, where people are drinking and chatting).

Also, the first time I worked on this piece was in college, and I thought it was easy because the notes are easy compared to something like the Sibelius concerto. Revisiting it now, I realize how much more you can do with those simple notes, which makes the piece hard to play well. So it's this combination that has sharpened my focus. I'm not part of a teacher's violin studio that requires me to play in a recital anymore. I signed up to play and it's totally exposed, and a tougher situation than I've known. And it's something I want to, care to do well at, because I want people to also understand why this piece is so great, because I can finally see it myself.


Your tone comes from your head.

This final thought didn't come from me, but it helped precipitate the recent changes. Sometimes even an often-repeated idea comes to you at the right time to have meaning for you.

I follow a number of classical musicians, mostly string players, on Instagram. Among them is a violinist named Arnaud Sussman, who stands out in the amount and quality of his content. He seems to manage his account himself and regularly posts videos of himself practicing. He also does Q&As every so often. In his most recent Q&A, someone asked him, how do you achieve a good tone [on the violin]?

Arnaud's response was (paraphrased from what I remember): First, your tone comes from your head. When I was younger I spent a lot of time listening to old records: Oistrahk, Heifetz, Milstein, Perlman... [Additional advice on practicing.]

This is a surprising statement because the more obvious idea is that tone comes from your physical movement—how you draw the bow on the string and how you vibrate your left hand. I realized I spent a lot of time thinking about the mechanics, and would tend to think reactively: "How do I want to adjust the tone that's coming out right now?" instead of "What do I want the tone to be?" before the bow hits the string. What happens when you imagine it first, is you are forced to conceptualize what tone means, and you aren't tied to what your muscle memory produces.

As a tangential outcome of this thought, I started playing a listening game now when I'm in an Uber and the driver has some pop music on. I try to figure out all the different instrumental parts. Synthesized pop music tends to have many layered repeating parts, which makes this exercise easier than for orchestral works, and still what seems like a simple background has more and more parts for the ear to pick out as I listen—what sounded like three parts initially become seven and I'm left wondering what I missed. Try it yourself!

If you got this far—come hear the Brahms sonata that inspired this post! My friend Kevin and I will be playing it at Noe Valley Ministry as part of the SF Civic Chamber Series, on Saturday Oct 6 @ 3pm.