The Importance of Names (Lessons from Winston Part 1)

In fall 2009, I took Patrick Winston's introductory AI class, 6.034. Almost nine years later I remember almost none of the content, but two of his "off-topic" lessons have stuck, and one has become a guiding principle for choosing where I work. In this post I'll just talk about one.

The first lesson is the Rumpelstiltskin Principle, which is roughly: "when you give a concept a name, it gives you power over it." Wikipedia shows this idea dates as far back as a paper by Willem van Tilburg in 1972.

There are many possible interpretations of this principle. There is the general positive take: when you have a name for a concept, you have an anchor against which to have a discussion and further explore it. There is a cynical take: you can manipulate how people perceive an idea with the name you choose.

For me, the interesting corollary of this principle is: you should expand your vocabulary about a topic, and seek to be specific. A general word for a large category of ideas gives you "power" over a whole lot of vagueness. One example is the power we have over our emotions, the better we are to label them. (This wheel below is in fact still very incomplete, as articles like this one—"216 'untranslatable' emotional words from non-English languages"—remind us.) Learning these words is part of developing emotional maturity. 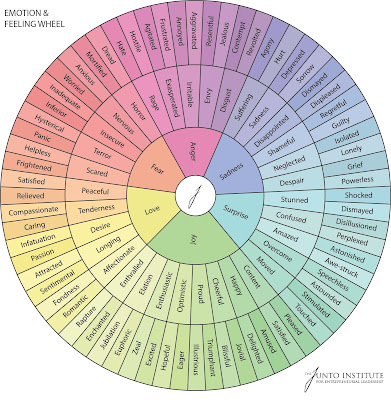 These days there is a lot of news about "social media" and "algorithms," and it's disconcerting how definitive a pronouncement people are making about such large general concepts. It's hard to say specific things about not-specific concepts. So I guess the other side of this Principle is: a name for a general concept can give you the feeling of power over that entire concept. And this is a word of warning to ourselves. Even a term like "climate change," which people talk and are concerned about for good reason, gives us a false understanding of the general topic. One warning sign is: if I know a general word but no specific words for the topic I'm talking about... I either should do some more research (or invent some words for my new field).

One of the interesting parts about law in particular is just how many terms there are. One small specific thing I learned from the outcome of a court case over a beating at the August Charlottesville white nationalist rally is there is a higher form of assault called "malicious wounding" that is more serious than "assault and battery." Law is rightfully full of terms because it's an attempt to put clear rules around the ambiguous world (and still there is plenty of ambiguity left over so that we need lawyers, judges, and juries). One way of looking at law is that it's purposely inscrutable to the masses because it keeps the in-crowd employed. The other way of looking at any field with a thickness of vocabulary is that this field likely has a deep understanding of something.
at May 15, 2018