Since returning from Taiwan four weeks ago, I've been practicing reading and writing Chinese almost daily.

While I'd hardly call myself old (except in the soul), it hit me this trip more profoundly than others that one day my parents will die and I will be on my own to carry on relationships with the half of my cousins who grew up in Taiwan. This visit was a big family reunion on my mom's side. I rarely see my extended family, much less all together, and probably spent more time with my cousins—both American and Taiwanese—in this trip than all others combined. I was surprised how much I enjoyed talking to them, even if the communication was sometimes challenging with lack of English fluency met by rusty Mandarin.

So that was a kick in the butt to revive and improve my Chinese literacy. And there's the promise it will be a useful skill at work. Instabase will be processing Chinese documents for sure.

I've also realized that to not act would be throwing away a lot of advantages I've had. My parents spoke and still speak Mandarin at home, so even if my vocabulary is limited to household talk and I'm literate at a 2nd or 3rd grade level, that's a big step up. One of my cousins reached out on Messenger last week to ask for help filling out a job application to be a nurse at Google Taipei. The application is in English. She started the conversation in English, but we hit a point where I had to ask her what she meant—her grammar was off enough I couldn't be sure of the meaning—and we switched to Chinese. Even with my pasting most of the conversation into Google Translate, which is pretty bad about half the time for Chinese actually, the conversation was more productive. What I needed was her words to be read into pinyin (the sounds of the words) by Translate, and Translate to give me the written words for some phrases. Thus was the state of affairs despite my metaphorically sitting on the couch eating chips w.r.t. my Chinese skills the past 10+ years. Basically, being bilingual from your parents is a cheat code.

About a year ago I bought a mini notebook from a home goods store in Cole Valley that has since closed down. Lately I've begun to favor smaller notebooks because they're easier to carry around and to fill up, which leads me to write in them. This Decomposition Book (which I'll now get on Amazon) measures 6.25 x 4 inches. It works well for Chinese because it has grids. I use the Decomposition Book for building up my "curriculum," and a throwaway pad to do rote drilling. 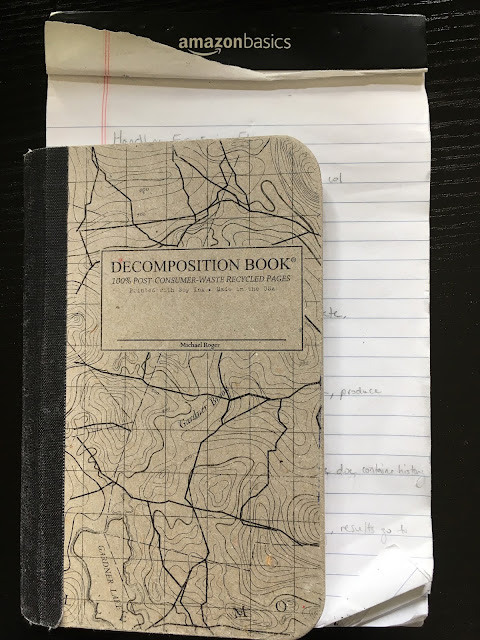 My curriculum comes primarily from learnwitholiver.com/chinese, which I've been a member of since 2009. I smiled when I saw an email from them a few months ago announcing they were being featured on Product Hunt—it was a bit like seeing an old neighbor in the regional news.

My first instinct was to go directly to the site to pull words from lists I created back in 2009. 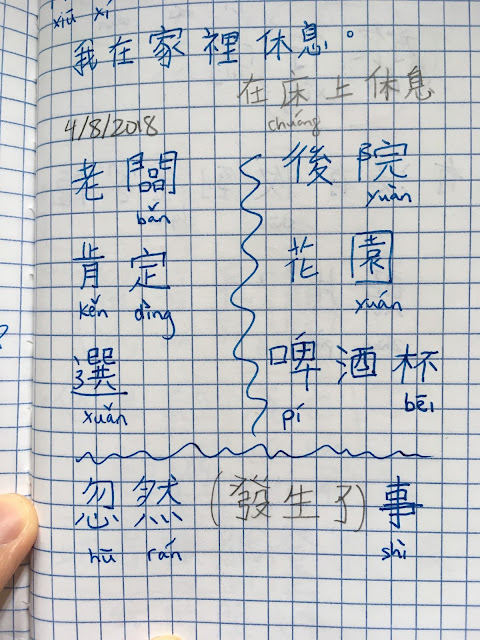 I've since switched to mostly pulling sentences from the weekly newsletters and circling the phrases I need to drill. Sentences are more fun and make it easier to test myself: it's easier to remember the English version of sentences to translate instead of individual phrases. 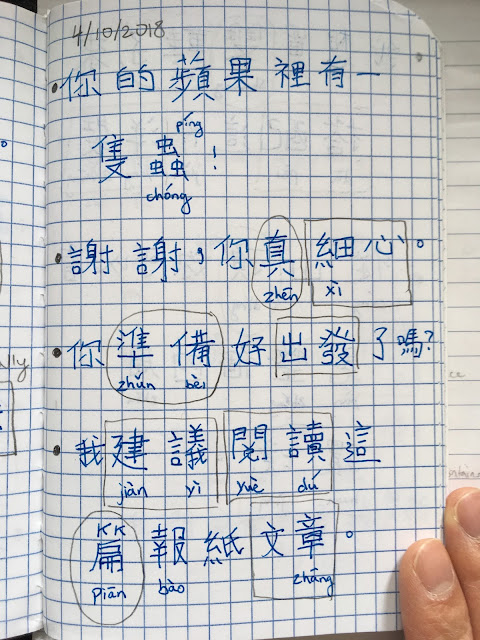 I still do phrase work, but instead of going wide on a large number of phrases, I'll instead hone in on a single word and learn a lot of phrases that use that word. One of the challenges in Chinese is there are a lot of homophones, and part of my illiteracy is not knowing which of the many characters with the same sound to use in a given context. And similar to English (e.g. the word "wind"), words can have different pronunciations and carry different meaning in different contexts. I find honing in on single word and all its usages helps with these challenges in particular. Here's practice with the word "fu4". 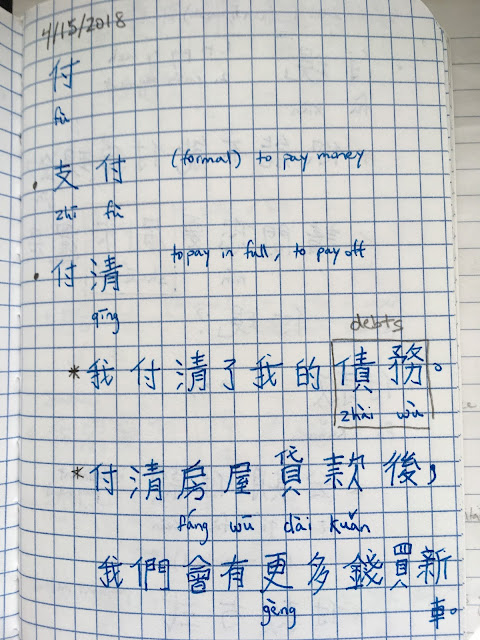 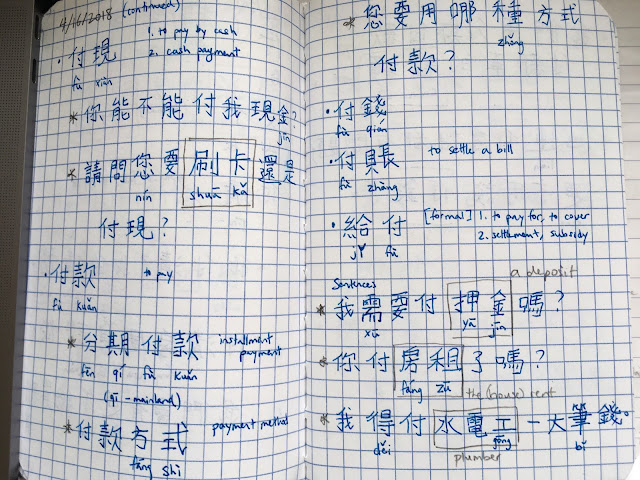 The most engaging practice comes from real conversations. I transcribe some of the conversations I have over Messenger or Line (my family now has a Line group, which is a huge step for my mom), and browse my cousins' Facebook posts and comments. 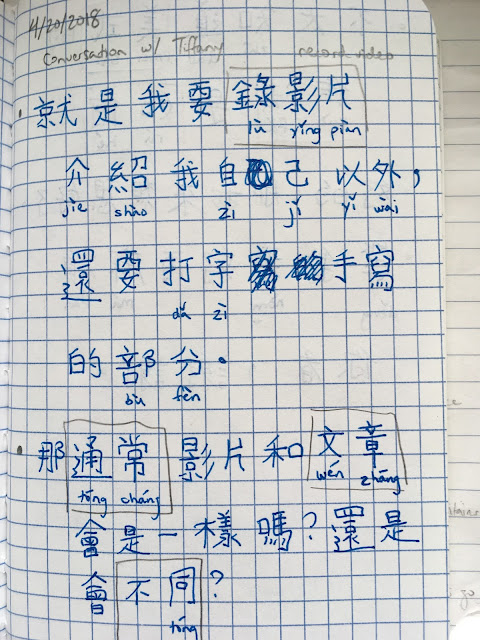 I write all the material in the Decomposition Book once, then repeatedly hand-copy the phrases and sentences into the throwaway pad. I've found this to be a productive and therapeutic way of spending the morning Muni ride. 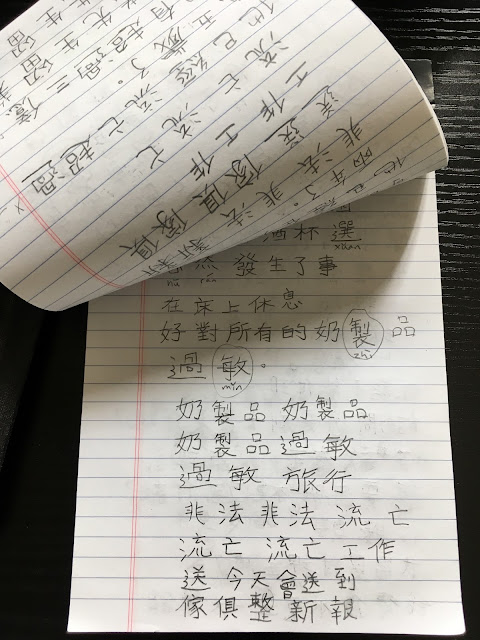 A month in, I've found the language practice to be intrinsically pleasurable. It gives my day a positive anchor: regardless of what happens, I make forward progress on something meaningful that depends on no one else. Playing violin can fill that role too, but progress there now happens on a longer timescale.